Your message has been sent!
Thank you for contacting us. We will get back to you as soon as possible.
send a new message
close
Please login for the restricted user area here. It is designated for authorised users only.
Your message has been sent!
In hac habitasse platea dictumst. Vivamus adipiscing fermentum quam volutp.
send a new message
close
Home
About
Partners
Contact
login
logout
Press Legal notice
return
Words by Daniel Alsina

The second part of the Museu Etnològic i de Cultures del Món workshop the Ecological Sustainability of the City, New models for the City was introduced by Daniel Alsina's (Architect and Coordinator of the Barcelona Superblock Technical Office) Keynote on Re-programming the city: Barcelona Superblock.

The city government of Barcelona has a strategy to transform the city in order to achieve a healthier, with less pollution and less noise, with more social activity and a good place for local commerce. This transformation takes place to face the Climate Emergency declared by the city in 15th January 2020.

New re-programming is about the next three vectors below:

Barcelona is a street and squares city, and has not many large parks. Most of its streets have already trees, but still the city has not as many green areas as the OMS prescribes.  Besides, every corner, street, square, roof or façade, offers a good place to increase the green.

Therefore, among other policies, the city is now changing some big avenues from private car arteries into green avenues connecting in a metropolitan way its parks and city hills in order to promote biodiversity.

Pg Sant Joan/Pi i Margall Ave as well as Pl Glòries/Meridiana Ave are examples of these green corridors. 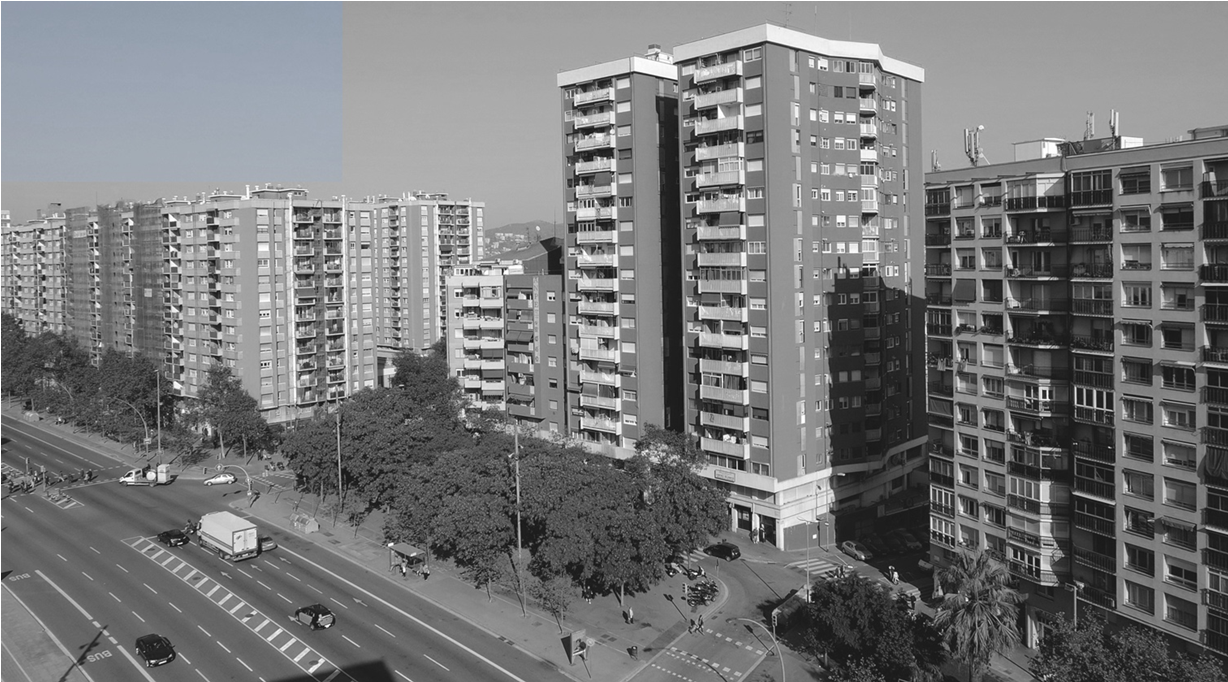 Barcelona is a compact and dense city, and has good conditions to be transformed into a more sustainable one: Its people have housing, jobs, leisure and facilities in a short distance. It has good public transportation system, it is mostly flat and weather conditions are very good for active mobility.

Thus, in the last years the city has been changing to consolidate a better and much larger cycling lane network, a more efficient public transportation network (Metro, Bus and Tramway, intercity train, etc.).

The city is doing big effort in increasing the amount of public dwelling (it will be doubled in a few years) but it still has a long way to achieve an optimal level.

And some programs are taking place in the city for bringing life to city’s streets:

SUPERBLOCKS PROGRAM. This internationally well-known program consists in generating a new pedestrian street network. Thus, 1 out of 3 streets of the city will be transformed to hold walking people in the center (metaphorically and literally), as these streets (called green streets) are converted to a green infrastructure and they become a good basis where to set up local commerce.

This program is to be spread all over the city, but initially it will be focused in Eixample District. This is the center of the city, and currently it is the part that holds more traffic, is more polluted and has less green for inhabitant. Nevertheless, as it is the city center, it already has the best public transportation connections.

So it has been weaved a 21 green streets map that link different districts of the city to be built before 2030. Thus, when two green streets cross to each other, a new 2.000sq.m square is generated from a grey asphalt former area into a green and social activity area for everyone. Therefore, 21 new squares will be constructed as long as the new 21 green streets will be. 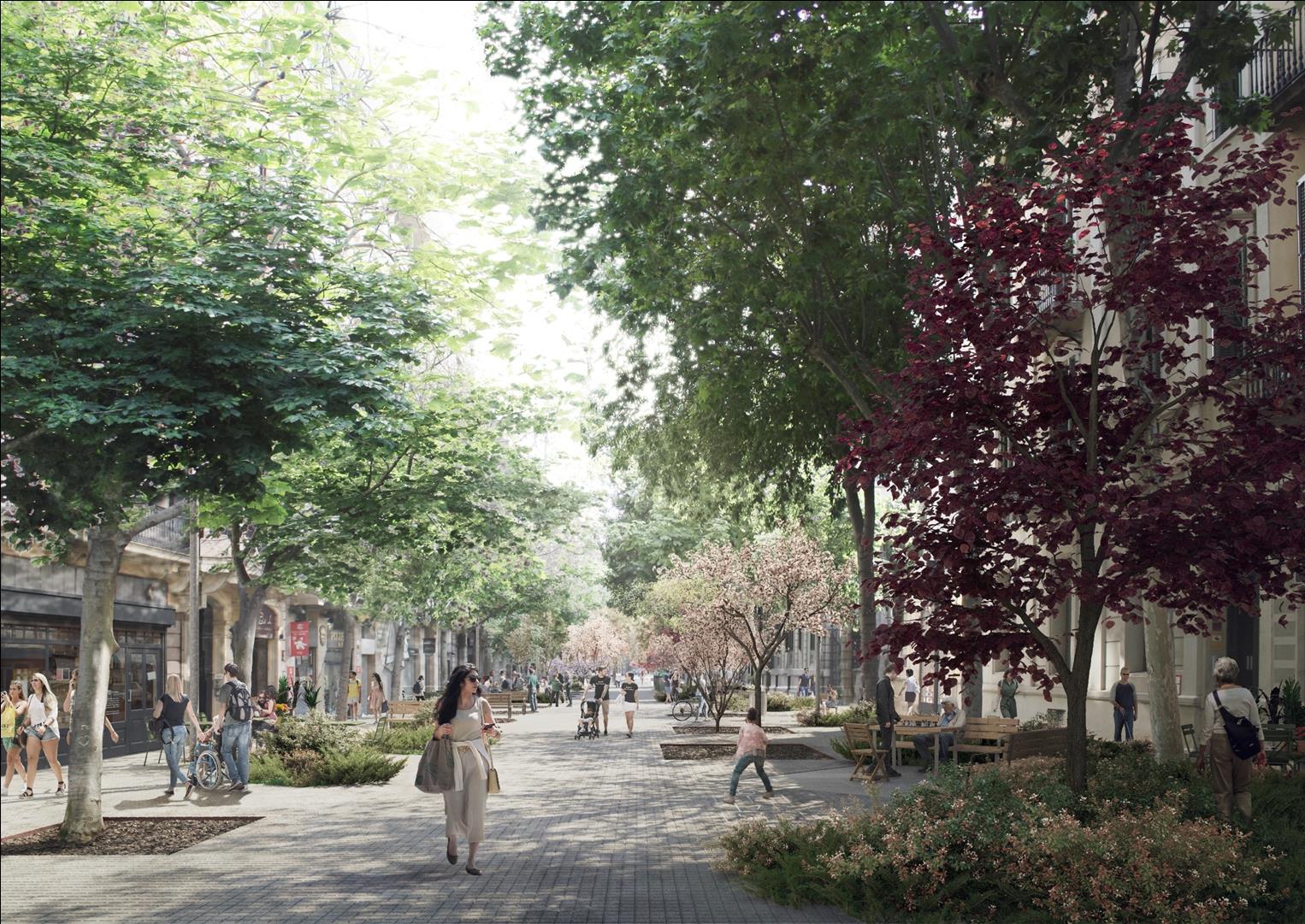 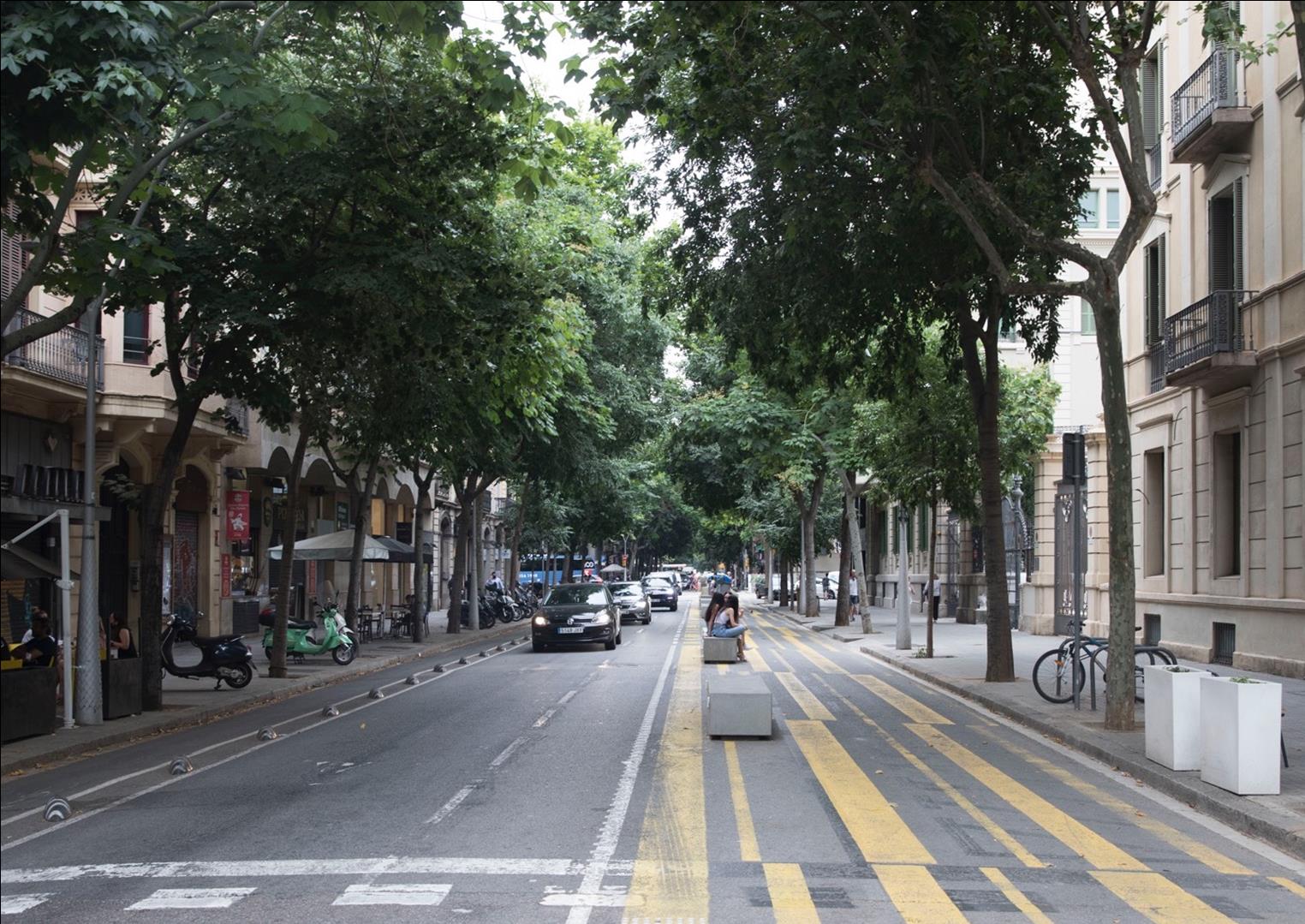 LET’S PROTECT PUR SCHOOLS. Barcelona has 600 schools spread out all over the city. This program acts in their surroundings, specially their entrances public space, for them to be safer, with less traffic (and much slower), less polluted, less noisy, and with better conditions for social relationship, for playing or just for waiting to enter the school.

Next year one third of total amount of schools will have a new surrounding more comfortable for the kids and their families. 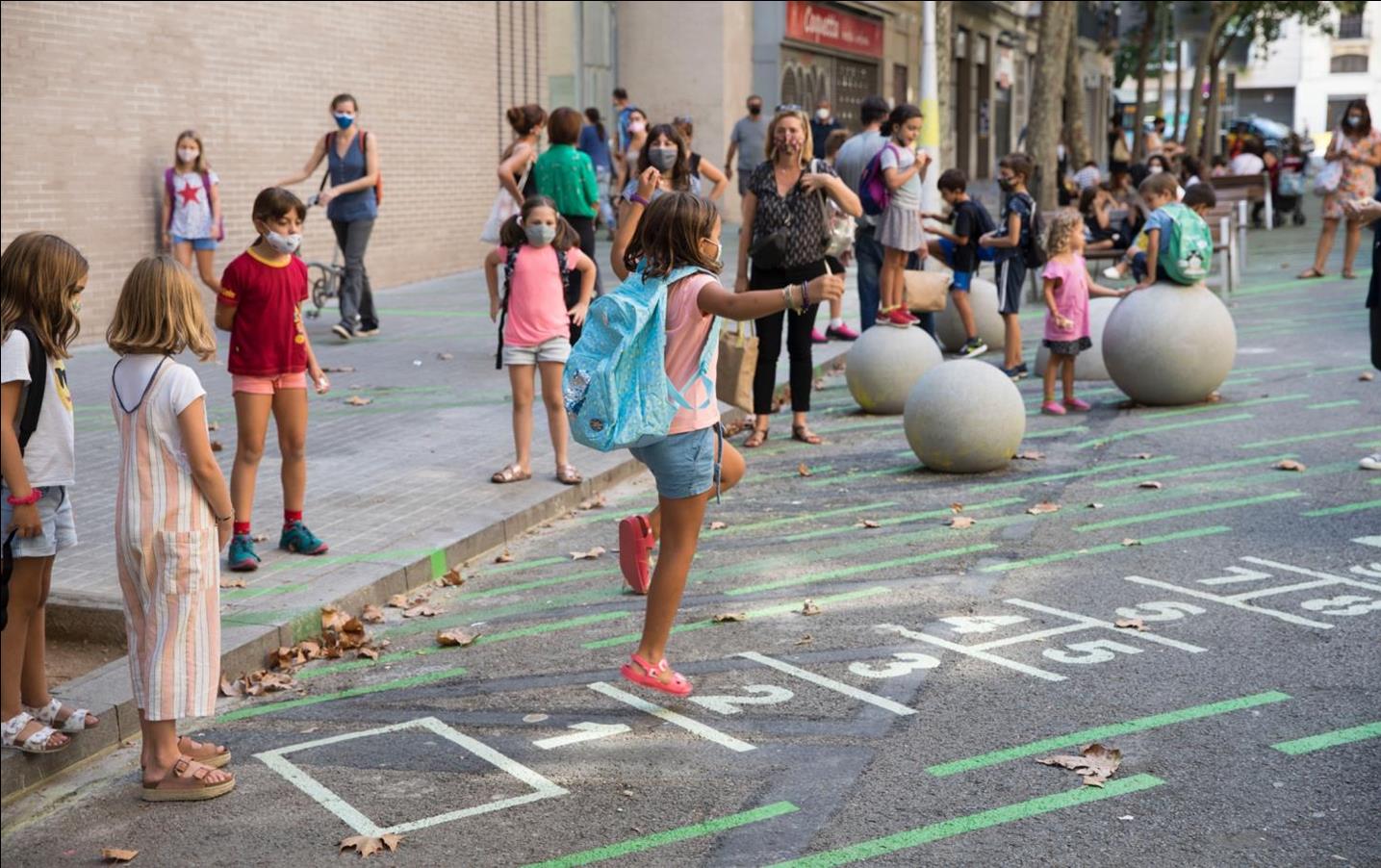 ‘TACTICAL’ ACTIONS. To implement these transformations in the city in a fast and inexpensive way, a new kind of actions can take place. They consist in changing the use of a street by painting its pavement, by adding new furniture and green planters. Therefore, pedestrians have more space for social activities and traffic decreases partially from these areas. Tactical actions normally take place as a first phase of a further larger transformation work. 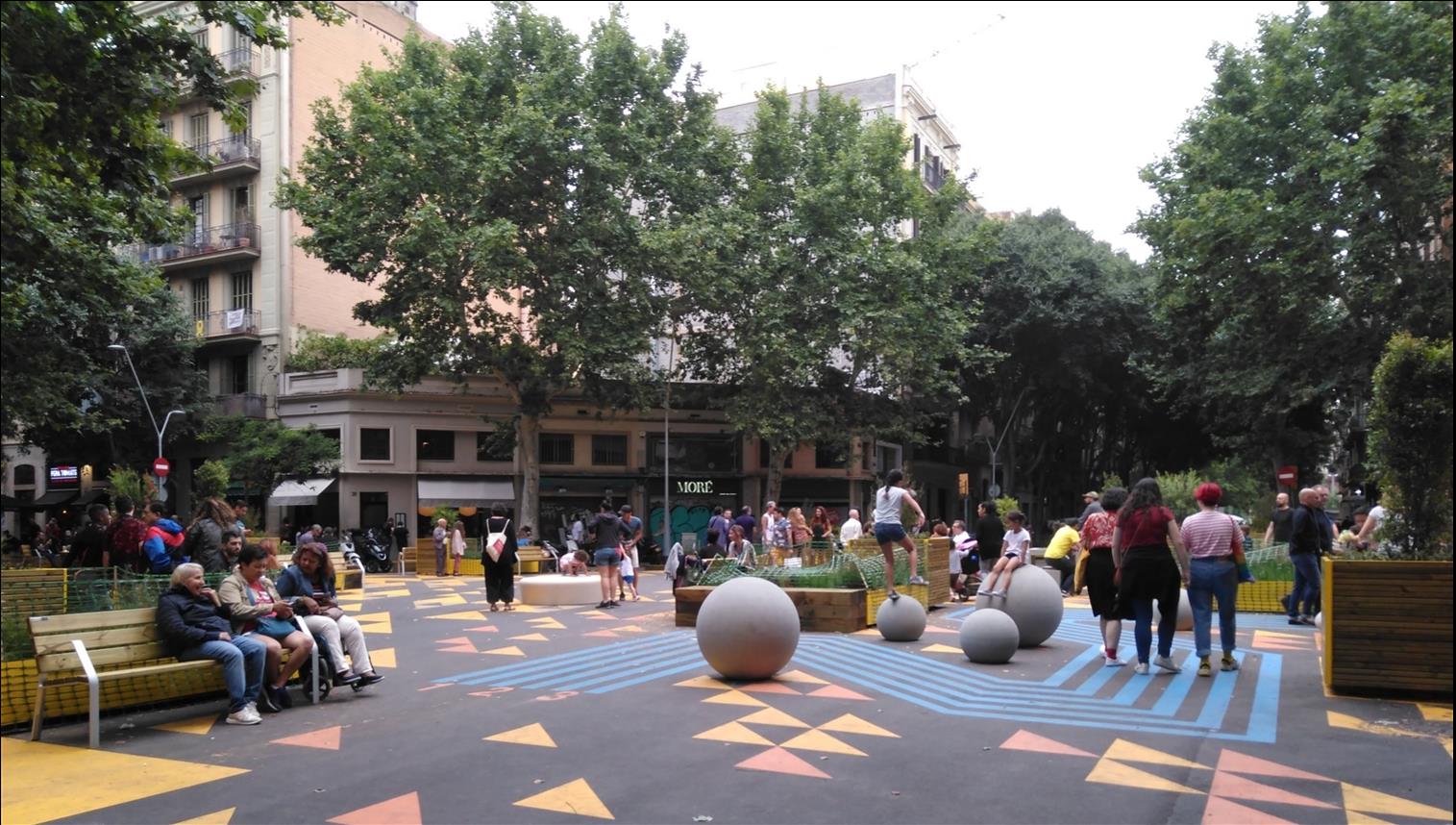 OPEN STREETS. This program takes place in weekend days in big traffic arteries of the city. These certain days traffic is not allowed so pedestrians fill the open streets with life. 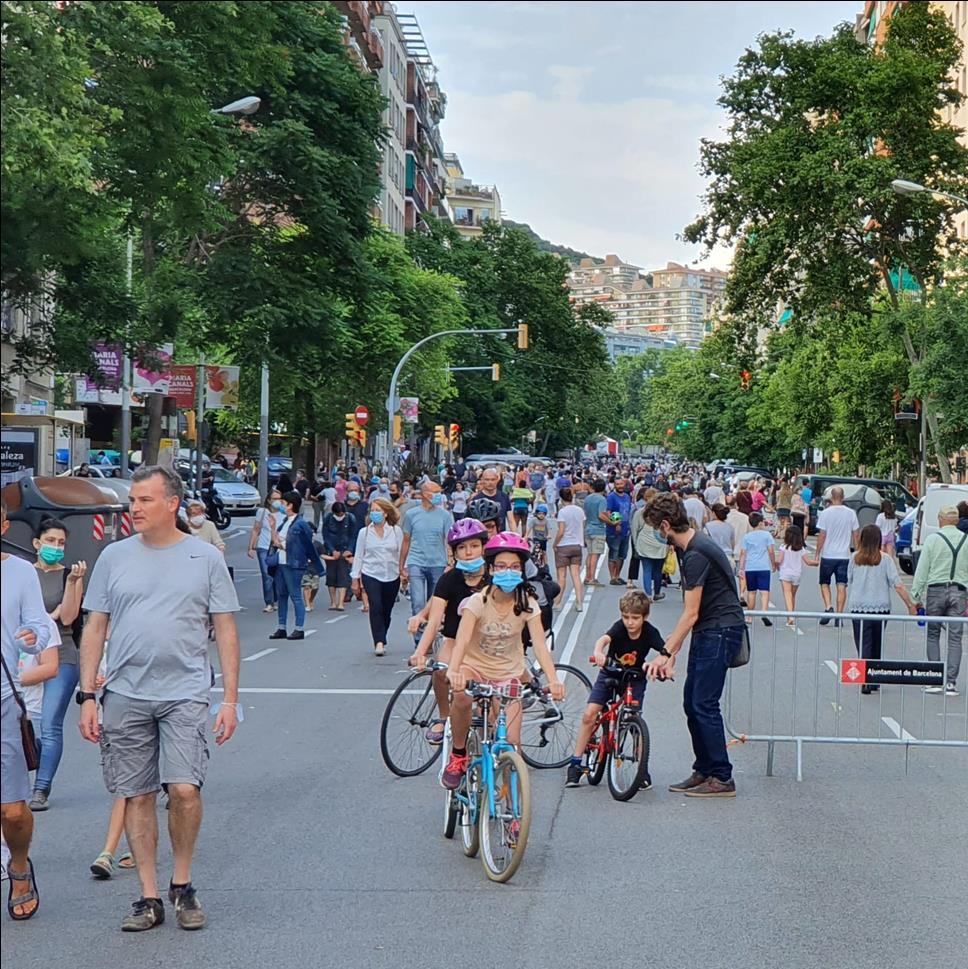 All these programs and actions would not be possible without citizen confidence and collaboration. Therefore, every step taken by the city Government needs the approval of them in different scales.

So many meetings take place for every decision: From small ‘driving groups’ with association and collective representatives, to large open sessions.

They are set in different scales (neighborhood, district or city).

Some of them are aimed at specific groups like commerce traders, children, disabled people, etc. 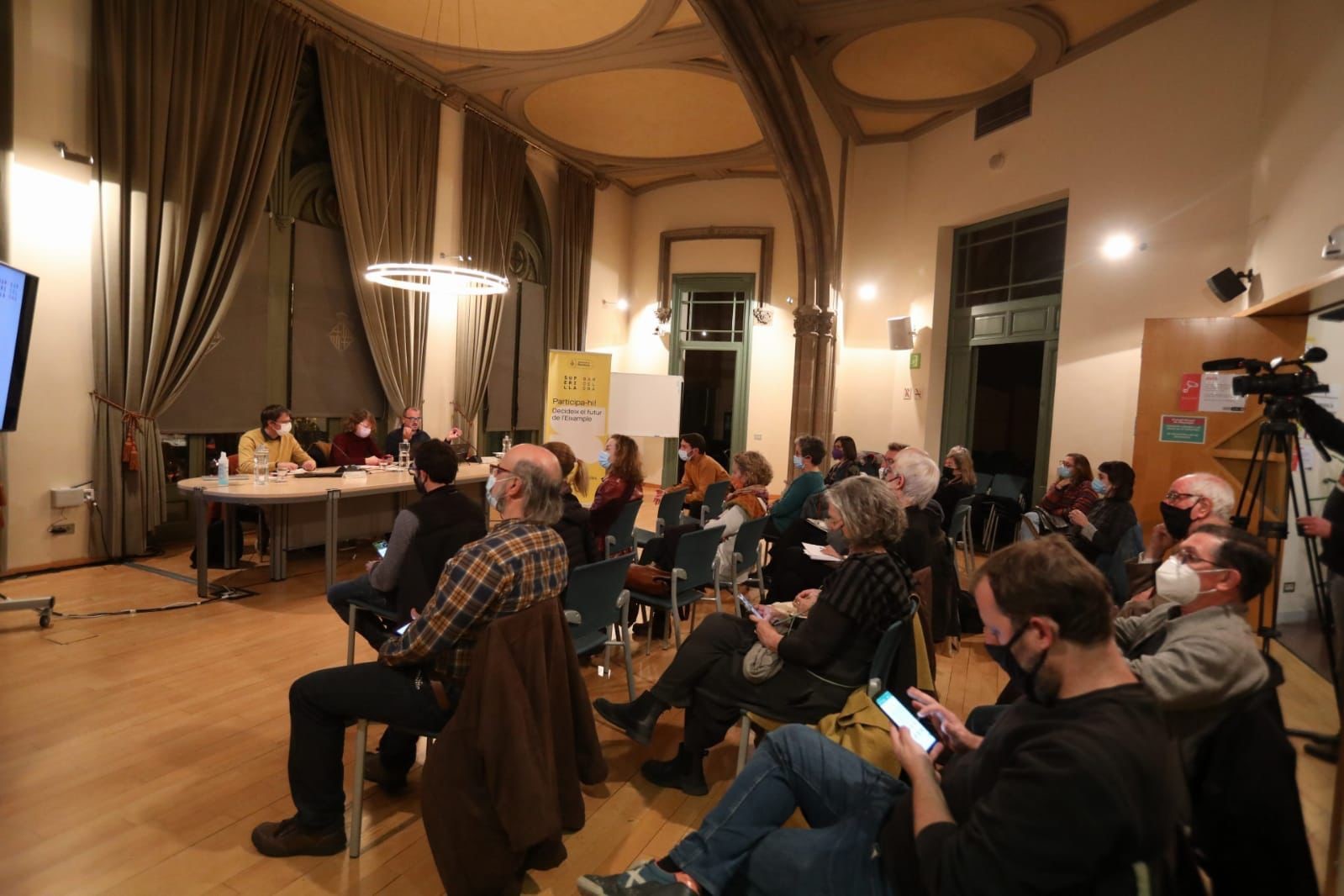